I look forward to the day I break the language barrier.  But unlike Chuck Yeager and the sound barrier (hmm… Chuck Yeager and the Sonic Booms sounds like it would make a cool band name…), there is no specific target to surpass.  Fluency is a hard thing to measure and one need not be fluent to be able to read heating controls or tell the landlady about the unexpected wading pool in your living room.  This particular adventure of water hot and cold started with the switch to a new apartment.

On the day my wife and I moved in to our new apartment in South Korea, we received not only internet access, but a new washing machine and a new stove.  We soon discovered, however, that we could not get the stove to ignite (it was a two-burner, self-igniting gas stove).  And no matter how far we turned the handle to the hot side, the shower only poured out cold water.  Unfortunately for us, the person who had been assisting us was swamped with office work at the school, so he wasn’t able to get around to helping us.  We spent a week taking “brisk and refreshing” showers and heating up instant rice in the microwave.

Last night, the School Director took the school staff out to eat at a nice restaurant and afterwards I decided to head to noraebang (Korean for karaoke)  with some of my fellow teachers.  Eruanna decided to head back to our apartment.  I had a lot of fun, especially since the place supplied tambourines in the room we rented.  Unlike in America, where you get up in front of a bunch of strangers and make a fool of yourself, in Korea (and in Japan, I’ve heard) you rent a room with a bunch of people you know and make a fool of yourself with them.  There were plenty of English songs to sing, though some of the Korean teachers did sing one K-pop song (lyrics were in Korean, so I only sort of got the sounds).  There were live-action and cartoon videos playing behind the lyrics and I had a hard time telling if it was random or selected for each song.  I nearly lost my voice on Bohemian Rhapsody… ^^

I arrived back to Eruanna all sweaty and she took a particular interest in me showering, more than please-shower-because-you’re-sweaty warranted.  I turned the water on and had to jump out of the stream because it was hot!  She rather enjoyed my reaction.  Turns out the control panel that we rightly guessed controlled the under-floor heating also controlled the hot water for the shower…  All we had to do was turn it on and then select the water-only option… So we felt a little sheepish, even though we couldn’t understand the Korean to know…  And the fellow teacher who helped Eruanna out while I was the tambourine man also explained that there was a valve you opened for the gas when you were using the stove and then closed when you were done.  Simple, really, but difficult when you aren’t used to that system.

Farkle, if you aren’t aware, is a game place with 6 d6s.  The goal is to reach 10,000 points and you have to get 500 points in one turn to be able to get on the board.  5s are worth 50 points, 1s are worth 100 points, 3 of a kind rolled at the same time are worth the number on the dice x 100 (so 3 5s = 500 points), and so on.  On your turn you roll the dice and check to see if you have scored any points.  If you haven’t it’s the next person’s turn, but if you have, you have to set aside at least one scoring die and then may roll again. If your second roll on your turn doesn’t produce scoring dice, then you forfeit the points you would have made, but if it does, then you may repeat.  So anyways, we played Farkle for some time – I barely won after being behind for most of the game.  I stood up and noticed the floor near the washing machine closet was glistening… there was a wading pool forming on our living room floor. 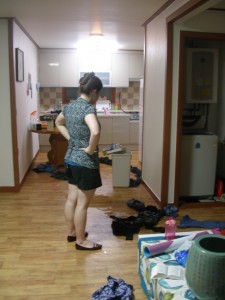 Eruanna went upstairs to find the landlady while I did my best to use the somewhat damp unwashed laundry to halt the flow of water across the floor.  The landlady wasn’t in, however, so Eruanna had to borrow the phone of an English-speaking Korean (we can’t get a phone until we fill out our alien registration cards and we have to get a health check before  we can fill out the cards…) to try and call our helpful Korean friend, but we couldn’t get his phone number to work, so we tried calling one of our fellow teachers, but couldn’t reach her, so then we called another teacher, who then called our helpful Korean friend, who called our landlady, who then came over from a nearby building (which explains why we couldn’t find her in our building).  All of which led to the discovery that when the new washing machine was installed, they forgot to put the drain pipe from the washing machine into the drain in the floor…

The good thing was that I brought along my “camping” towel (it’s lightweight and dries quickly) and used that to sop up the water on the floor.  And since the pile of dirty clothes was going to get washed anyway, it didn’t really matter that they got soaked.  And it will be nice when we have the ability to converse with the landlady and understand all of what is being said, but that is an ongoing adventure.

In other news, the expansion of my den is coming along nicely, albeit slowly (having to lesson plan will do that to you…) and I hope to open up at least one more area to the public.  And now I have an urge to explore D’ni, but I left those games in the states.

May your adventures have happy endings!
~Direlda