Now that I’ve recovered from the attack on my person by the agents of Darth Salmonella or Darth Escherichia Coli (rather, they are the two most likely suspects – it was too quick to be the work of Darth Giardia and while I may have spotted a figure with a red fedora measuring up the temples, her modus operandi is lifting famous things, so it couldn’t have been her), I have enough energy to ramble on about my adventure this winter holiday.

You should find a comfortable seat, for I shall be rambling for quite a bit.  So much, in fact, that I’ve decided to take breaks in between.  This is the first part, the second shall come on my Saturday, and the third on my Sunday (this will also allow me to test whether or not I can schedule my ramblings to appear at a set time in advance).

Now you’ll hear a tail, errm… tale, of a fateful trip that started from a snowy airport aboard a flying ship.  Actually, that’s jumping ahead of things – I think we need to go back to December 26th and go from there.  For it is around then that the sleepless nights first started…

If you recall I mentioned that for Christmas, in addition to the various presents we got each other, my wife and I had agreed to watch the cat of mutual friends of ours while they were away on vacation.  The cat didn’t appreciate this at all, which it made known by being rather loud and obnoxious the evening of the 24th.  So I didn’t get much sleep.  We also had to take down the scarf that was helping keep the light of a streetlamp from entering our bedroom because the cat had taken a fancy to it…

So I returned to less than optimal sleep from the increase in light pouring into my room (a word to streetlamp makers – give them hoods to direct the light at the ground!  There’s no need to try to illuminate outer space and the rooms of all the apartments adjacent).

Eventually the cat came to terms with being in our apartment.  Though it didn’t seem to like me and would occasionally hiss at me while I was trying to pet it.  That’s one reason why we made the cat toy out of a stick and tinsel – to keep the cat far enough away that we wouldn’t get scratched!  All-in-all it was fun having a cat around, though I was glad to take it home again on the 28th of December.

We took the bus to return the cat.  (It’s faster and there was still snow on the ground)  An older Korean on the bus heard the cat in the carrier and turned around and smiled at us and may have meowed back at the cat once or twice.  I’m glad he wasn’t upset, because that cat was once more unhappy and vocal.

When we arrived at the apartment door, we found that the code we were given wasn’t working.  It took gesturing and pointing with several building workers before two of them went up to look at the door and a third found us someone who could speak English.  She also had the code book.  Turns out we had all the right numbers, but our friends had written them down a bit scrambled.  So we followed her up to the door and watched her try the correct code and fail to get the door to unlock.

It took several attempts until the door finally responded to the correct code and opened.  The lock is battery powered and these batteries have to be replaced from the inside; the batteries were just about dead, which is why there was so much trouble.  Once we were inside, the workers left (I guess the cat told them we were friends and not some random people trying to get into apartments…?

) and we set about stocking the cat with enough food and water to last it the few days between now and when its owners would return.  On our way out, the cat came up to me in a friendly manner, so I pet it.  It scratched me.

The door also wouldn’t lock, so I stood outside with my gloves off so I could apply direct pressure to the scratch on my knuckle while watching the door as I waited for my wife to return with new batteries.

It seemed like a long time, especially since my paws were cold, but it didn’t take my wife too long to return with batteries.  And then we said goodbye to the cat!

My wife made me put snow on the scratch to help prevent scaring.

It hurt, but looking back, it’s good that I did.  Funny how sometimes you have to experience pain before you get something useful.  Makes you think twice about these easy ways to do x, y, and z that seem so prevalent in America – what is being left out and is it really beneficial?

Anyways, we returned to our apartment and finished gathering things for our trip to Cambodia.  I took a bit longer than expected when I realized that I needed to clear out one of my memory cards for my camera (the 8GB card still had pictures from a trip to Ireland I took in 2008…) to make room for the trip.  So we left a bit later than I thought we should, which was stressing me out a bit – I didn’t want to cause us to miss our vacation.  We still caught the airport “limousine” (actually a bus, go figure) to Incheon International Airport and it was fun seeing the countryside covered in snow.

Checking in and security at the airport were a breeze.  It helped that we had no baggage to check.  We had a little time to make it to our flight, which was mostly used up when we saw a procession marching down part of the terminal. 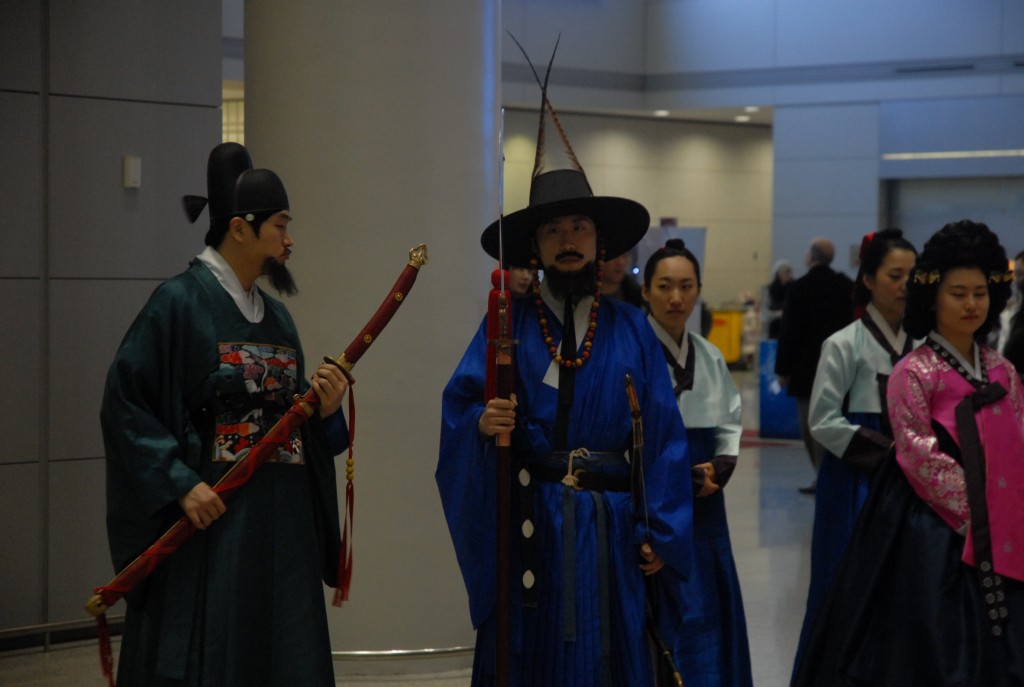 Getting through security must have been a pain...

By the time we made it to the gate, I was hungry, overly warm (from wearing a couple of layers to keep me warm while walking to the bus), needing to use the WC, and worried that I had caused us to be late.  Turns out the flight was delayed.  So we took the time to relieve ourselves and then ate.  The food took longer to be prepared than I had hoped and my dish was piping hot, so I couldn’t scarf it down.  Once again I become stressed that I was going to cause us to be late.  Once again the plane was delayed some more.

Having temporarily learned my lesson, I relaxed and enjoyed my time in the airport.  Once on the plane, we discovered that our economy class seats had somehow given us the nicer lounge chair type seats.

I wish I had taken a picture of them, but they were rather comfortable!

I watched Winnie the Pooh and The Smurfs “with” my wife (we pressed play at the same time on our separate screens) and enjoyed them both.  I especially liked how each of them referenced the original work within the film.  We had a nice meal.

Korean Air does a good job of treating its passengers right.

When we landed in Cambodia, the first thing I noticed was that I was still a little too warm.  Oh!  Since I’ve rambled on quite a bit, I’ll let you take a break here.  Hope you don’t mind waiting.