I left off rambling about how I had been too warm upon landing in Cambodia.  You see, it was 0° C or below in Korea when we left and 28° C in Cambodia.  I had removed my scarf, hat, windbreaker, gloves, and sweater, but I was still wearing my long underwear… Now I’m not one for warm climates (what with all my fur and all…), but it seemed like it would be pleasant enough once I had gotten a chance to dress more appropriately.

We had to get an entry visa, and this is where the adventure started getting interesting.  All of the passengers from the flight came down the steps en masse to the small visa processing area.  It was chaos.  First you had to survive a queue to deliver your passport and completed forms to one person.  This worker then took these into a room for processing.  While you waited you moved from the queue into what looked like a queue, but which was actually a blob.

You waited in the blob until another person behind the counter called your name. You then fought your way to him with your payment for the visa and received your passport with its newly issued visa from the Kingdom of Cambodia.  I’m starting to think that questgivers must have their own branch of bureaucracy, for they often ask you to take a letter, eye drops, key, tome, etc from them to point q and then do a bit of waiting before you can come back and receive whatever it is you were trying to get from them.

In any case, I got my somewhat psychedelic visa for my stay in Cambodia and it was then that I realized that I was in an actual kingdom.  I was still bubbling over that fact (it isn’t everyday you find yourself in one of those) when Eruanna (remember, that’s a name of my wife) and I met one of her friends from high school.  We would be staying at her family’s house for a couple nights before heading off to Angkor Wat!

I was really excited about seeing Angkor Wat.

After chatting some with Serrena and her brother, Eruanna and I went to sleep inside a mosquito net (actually more like a mesh tent) that had been set up on a bed in a spare bedroom.  Serrena had turned on the air conditioning for us, and I do recall seeing the remote, but both my wife and I spaced out about the remote.  So I ended up getting not enough sleep because I was too cold.

Yeah… not very bright on my part…

In the morning, after slaying mosquitoes with an electric racket, we went out for breakfast at a restaurant.  The soup was good.  It was more fascinating to learn that because of how busy the streets of Phnom Penh are, there are people who help you in and out of parking spots and you paid them for this assistance.  We got to see Serrena’s work and we got to see the work of Julie, Eruanna’s other Cambodian friend from high school.

Since the electric racket was so cool, I’m going to spend the space I could have used for describing the workplaces, such as how there was a Fox’s ice cream container being used as a pencil holder, to talk about the electric racket.  Serrena’s family (by the way, Cambodia is one of the places where multiple generations live in the same house and living with your parents after college isn’t looked down on) had several of them.  Imagine a tennis racket.  Replace the strings with a grid of metal and then add another layer with a space between.  Then add a power source, a small light bulb, a trigger button, and a switch to shift between off, zap, and light.  And there you have an electric racket for the smiting of mosquitoes.  They make some satisfying crackles when you fry them.

Sometimes they roast, which doesn’t create a pleasant smell.

Once Julie was ready to take us around Phnom Penh, we set out to see the sights.  Our first stop was Wat Phnom, a Buddhist temple located on a hill not far from the US Embassy (which was less interesting to look at than the French Embassy and its art display on the outer wall).

Wat Phnom was interesting – my first encounter with the long bannister naga (snakes that usually are depicted with more than one head) and I was actually allowed to take pictures inside the temple building.  But it was a really short visit.  Julie and her husband moved at a faster pace than I, so I constantly had to catch up.  I am generally slow, but especially so if I am taking pictures.  I have yet to go through my pictures in depth, but when I figure out where I will be posting them, I will provide links (which will be accessible through the scriptorium).  As we were wandering around the grounds of Wat Phnom, Julie and her husband bought lotus seeds for us to eat.  They were delicious.

After Wat Phnom came either lunch or the Russian market.  I’ll say the Russian market came first.  I’m not sure why it is called the Russian market, for there was nothing Russian about it that I could see.  Imagine a collection of stalls arranged into blocks with rows in between for customers to rove around.  Put it all under a corrugated roof.  Fill the stalls with a variety of goods – these ones here are selling power tools and other similar equipment.  These ones over here are hawking brightly colored scarves.  That stall is selling music and movies (it may be illegal copies).  This stall is selling jewelery and bags made from recycled materials, such as paper and forks.  And this woman wandering by is trying to sell you books about Cambodia that look like they may have been illegally copied and printed…

We had lunch at a Khmer-Thai restaurant.  The food was really good.

And we ate in the traditional eating section, where you sat on a cushion next to a low table.  All-in-all, I enjoyed it.

Next we drove around and Julie showed us the place where you rent a hall for a wedding or other ceremony and pointed out in which one she was married.  We also drove past what I assumed was the North Korean Embassy, which I recognized from its flag (and the flag was at half-mast).

After all of that driving we went to the Royal Palace.  You had to be wearing appropriate clothing to visit, so I saw some people having to buy pants to put on over their shorts or shirts to cover up their arms.  Spent a lot of time wandering the parts of the grounds that you were allowed to wander.  Below is one of the buildings you could enter, but only after taking off your shoes and hats and promising not to take pictures. 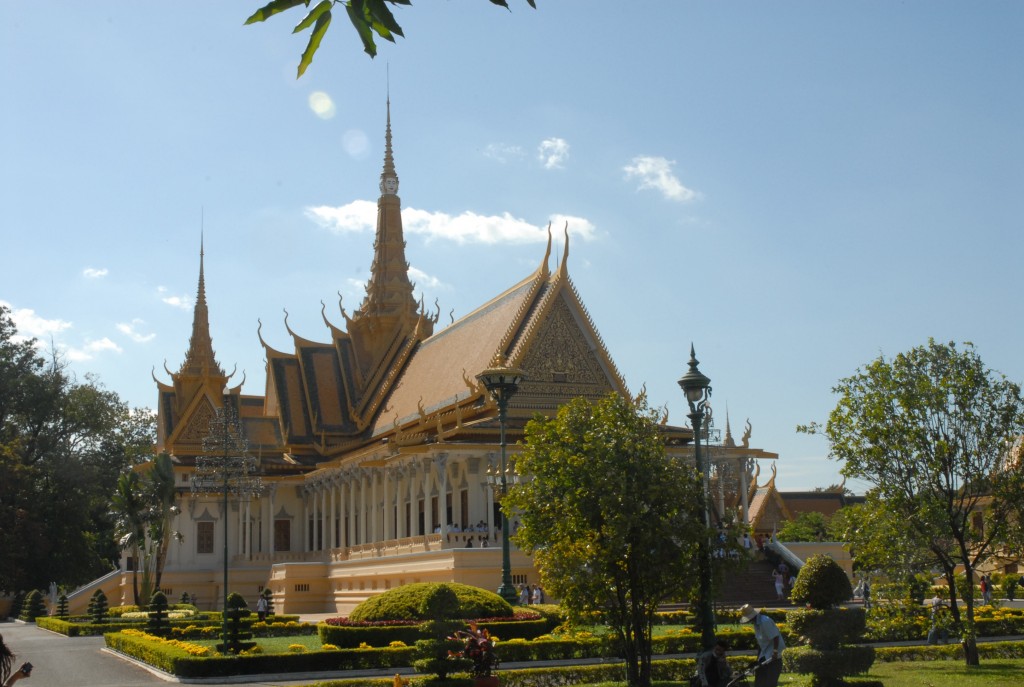 This is where you could meet the King

Near two of the doors there were mirrors so that visitors to the king could check their appearance before meeting him and make sure they were presentable.  The king wasn’t home – he was apparently in China for a medical visit.  I sort of understand why…

In another part of the palace grounds there was a really neat mural that wrapped around the edge of the wall that encircled the palace’s temple.  I took some pictures of it and hope to show those to you at some point.  It had suffered damage and it seems to be missing the bottom section, but the mythic story it tells is quite fascinating to me (more so than all the Buddha statues that were inside the temple).

After we had meandered through the Royal palace we headed over to the nearby National Museum.  Along the way Julie and her husband bought us sugarcane drinks from someone pushing a cart.  It tasted good, but in hindsight… probably should have gone with my gut feeling as they were buying the drinks and asked not to have one…

There was no photography in the museum, unless you paid money to be allowed to take photos of the garden in the center.  I started my leisurely museum pace and soon got left behind.  I was busy reading paintings – or were they tapestries?  Anyways, I was taking in the story presented in the art (the Reamker, which is the Cambodian version of the Ramayana) and was so engrossed by that endeavor that I didn’t notice everyone else moving on.

It wasn’t a big museum, so they found me easily enough.  And then we rushed through.  I wanted to actually read what little information was presented about the artifacts, but, alas…

At least I could recognize statues of Ganesha (he has an elephant’s head) and saw the scene from the Mahabharata where Bhima fights with Duryodhana.  But I didn’t feel like I had enough time to actually learn anything…  More of a Oh-look-there’s-an-old-statue-and-now-we’re-passing-by-this-old-stone-inscription-that-would-be-fascinating-to-peer-over-but-it’s-already-behind-us visit (being just as awkward to experience as it is to read that sentence-turned-adjective).

Which is not to say that I didn’t enjoy the company of Julie and her husband.  It was fun being with them and rather helpful to have someone who could speak Khmer for you.  But their pace and my pace are rather different and I probably should have spoken up for them to slow down…

Julie and her husband had to leave suddenly because of a medical emergency concerning one of her relatives, so Serrena picked us up and took us to eat at the Foreign Correspondents Club in Cambodia (or FCCC) restaurant, which is in the building that the FCCC had used, but isn’t actually associated with said organization.  The food was alright.  I had a burger with an egg on top, which, while delicious, was a big mistake, for it was sunny side up and perhaps not cooked as well as it should have been…

We returned to Serrena’s house and sometime early in the morning my sleep was disturbed by a need to vomit all of my food into the toilet.  Rather inconvenient and meant that once again I was sleep deprived.

Serrena’s family’s doctor visited in the morning, gave me some Smecta, a nasty tasting powdered medicine that was to be mixed in with water, and told me to watch what I ate.  And I had read the guidebook’s warning on Cambodian food…

So I spent the rest of that day resting in bed, having diarrhea, eating plain foods, taking Smecta (which was to control the diarrhea and not really do much for the cause), and drawing some.  Eruanna spent some of the day with Julie and some of the day taking care of me.  This was in lieu of going to Angkor Wat as had been planned.

I was not pleased by being sick and having the trip to Angkor Wat delayed.

That night, Eruanna vomited.  She had it worse than me and so the doctor came, gave her Smecta and other medicine, and put an IV into her. So we spent that day in the room (and I became better at wielding the electric racket); I assisted my wife by holding the IV up whenever she needed to move somewhere.

And that was our first three full days in the Kingdom of Wonder.  Yeah… it started off great, but then one of those blasted Sith Lords, most likely Darth Salmonella or Darth Escherichia Coli, had to go and ruin it.  I’ve rambled on for quite a bit, so I’m going to take a break and give you more tomorrow.  Blessings!