In any case, my subway ride was quite nice.  I actually got to sit in a seat while riding on line 2!

First time I’ve seen line 2’s subway cars with empty seats.  No one sat next to me, which meant I didn’t have to hold my tail in my lap.  My first stop was the area known as 홍대 (Hongdae), which is home to a university (from whence the name is derived), an indie music scene, underground clubs, a museum of optical illusions, and two decent-sized art supply stores.

My goal was to locate the two art supply stores.

I tried to find 호미 (HOMI) first, but the map I had looked at the night before turned out to be a bit wonky in terms of scale.  I wandered around a bit, pausing to scan the tents of people selling books in the middle of a side street (they were all in Korean

).  Eventually I decided to visit the art supply store in 홍익 (Hongik) University.  I knew I had found the right place when I beheld the long row of pens just inside the doors of the store. 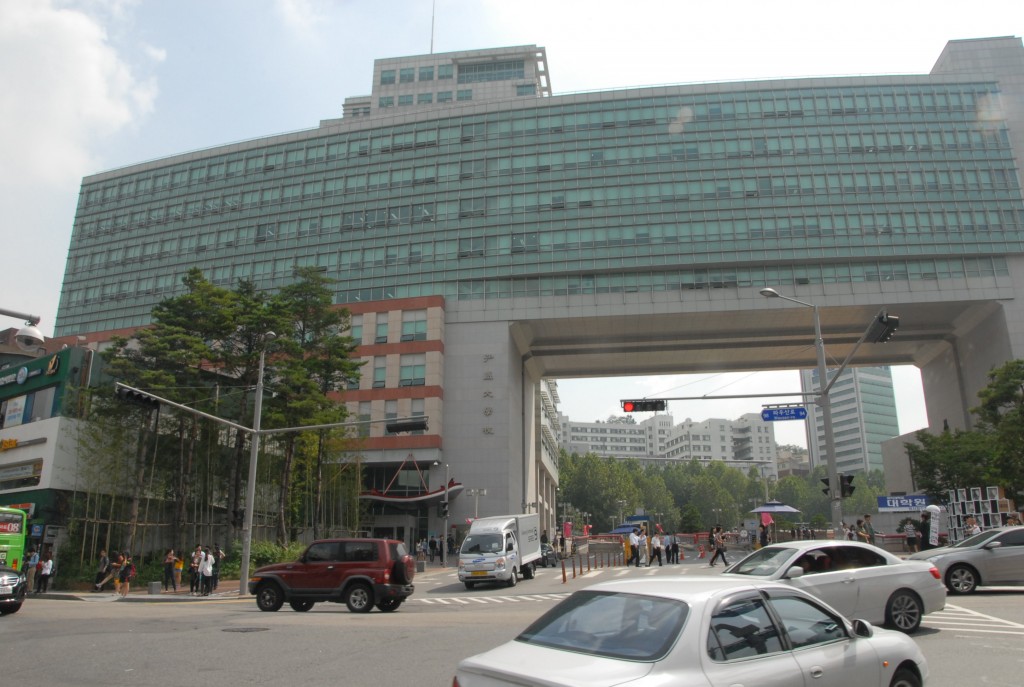 The art supply store at Hongik University is located on the ground floor of this building.

They had ShinHan Touch art markers (a Korean company), though I didn’t see any refill bottles for those markers (supposedly they exist…

).  They also had Copic art markers (in the original, sketch, ciao, and wide varieties – the comic marker seems to be sold only in Japan, which is where the company is based), plus the ink refill bottles and spare nibs.  If I decide to buy art markers it will be one of those two brands.  ShinHan’s markers are cheaper, but they have fewer colours (not necessarily a problem) and I haven’t yet been able to find their refill bottles (which is a problem).  I think it would be fun to play around with art markers.  And I like the idea of refillable markers.  But first I need to improve upon my art skills.  Though I did buy three ShinHan Touch markers last year after discovering Alpha, which is a store that sells some art supplies.  (As a side note, the name ShinHan makes me think of Shinra…)

The university art store also had a large selection of brushes and paints.  They had some nice pens for drawing and/or inking, including Sakura Pigma microns, Nouvel Pigma graphics (made by Sakura, but have more line width sizes than available in the States), Copic multiliners, and PITT artist brush pens.  I spent a lot of time looking over pens and art markers and then writing down prices on a notepad so that I could compare with what HOMI offered.

After a delightful wandering of the university art supply store, I decided to search once more for HOMI.  I wandered a bit further down the side streets than the map I had found had seemed to indicate.  I found the Trickeye museum, which looked like it might be fun to visit with my wife.  And then just past the museum, I found HOMI!

While the HOMI store website is in Korean, you can at least get a feel for their massive selection of art supplies!  The store was simply amazing!  They were selling Copic art markers for slightly less than the university art supply store, so if I decide to go with those, I’ll know where to buy them.  I ended up buying a larger sketchbook from them because I needed a bigger one (the one I had been using is small, which makes it good for carrying around, but not so good if you want to draw things a bit larger).  One of the staff members came up to me and asked me in English about what I was doing in Korea.  So I told her I was a writer.  And one of the cashiers was amused by my fox ears and tail.  All-in-all, it was an excellent stop.

My stomach told me it was time to eat something.

I eventually wandered into this Japanese restaurant: 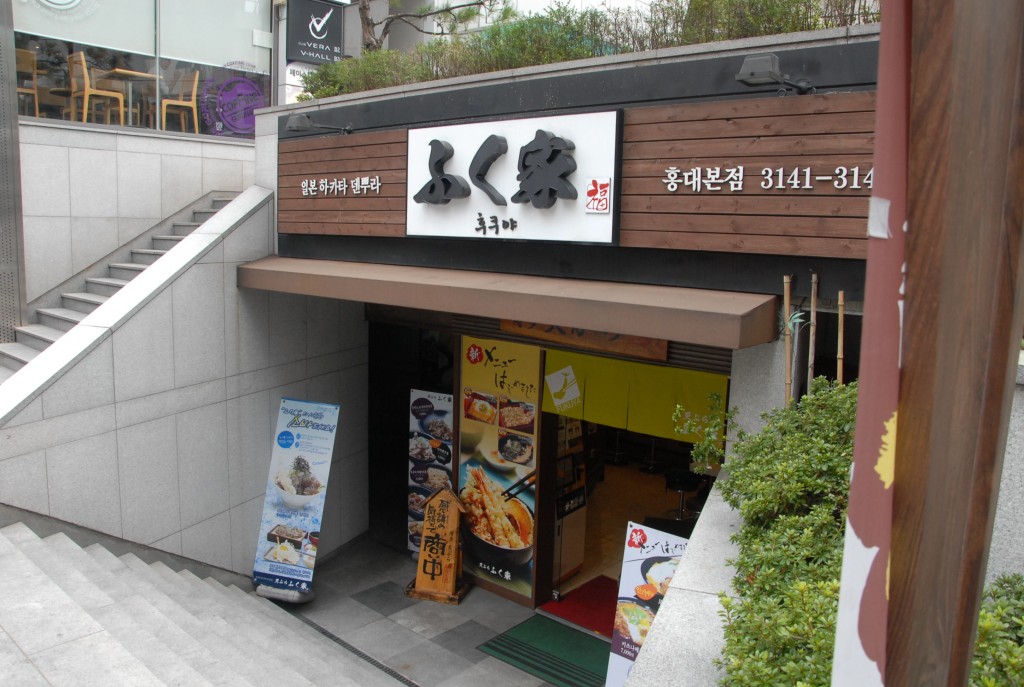 I really wanted some soba or udon.

I ordered a soba set from the menu, which was delicious.  It came with soba (mmmm…. I love those noodles

), a variety of fried food (including a fried leaf and fried squash slice), and a container of soy sauce.  I actually mistook the soy sauce for a cold soup (because I hadn’t thought to taste it) and it took the friendly English-speaking staff member to tell me I was supposed to put the soba into the soy sauce.

Oops…  They also had containers of kimchi on the counter (it was sort of bar-style seating, though they had a few tables that jutted out from one portion of the counter), so I served up a good portion of that for my side dish.

The coolest part of this restaurant, however, had to be how you ordered and paid for your food.  You didn’t tell the staff your order and then pay after.  No, you used this machine: 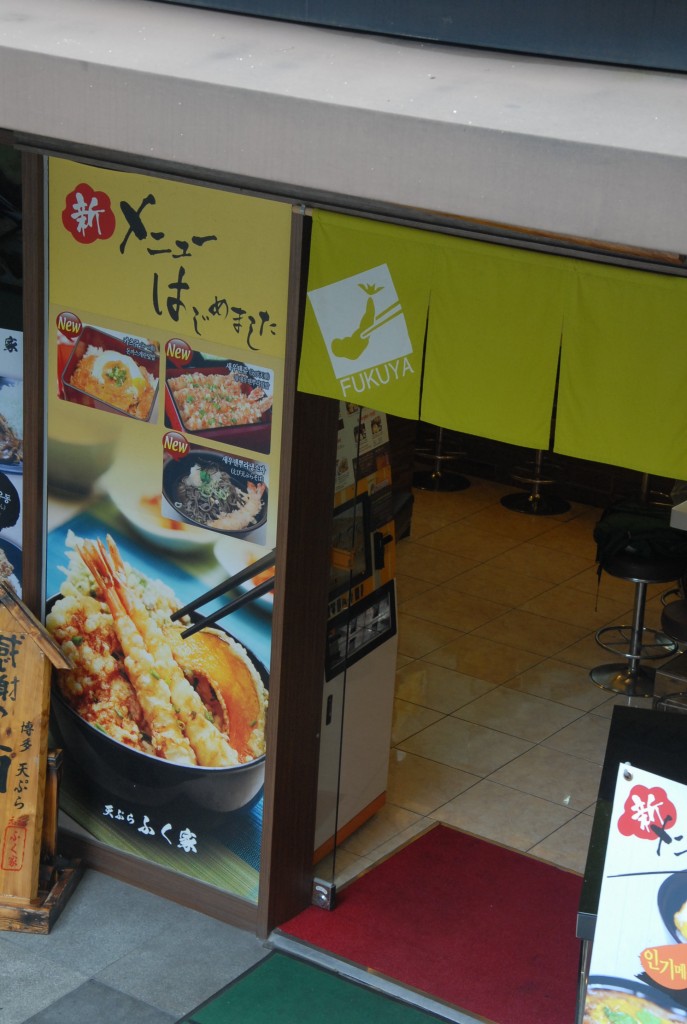 You can sort of see the touch screen…

On this machine’s touch screen was the restaurant’s menu.  You selected whatever you wanted from the menu, by touching it.  There were pictures to go with the Korean words, so that helped me know for sure what I was ordering.  Once you had everything you wanted selected, you either swiped your card through the card reader on the front or you inserted bills into the machine.  Upon payment for your order, the machine printed out a ticket.  You then sat down at one of the spots on the counter and gave your ticket to one of the staff.  They then would go and prepare your meal.  Not only was the machine fun and cool, it also saved me from the trouble of some restaurants where you aren’t sure if you are supposed to pay at your table or at the front.  And you don’t have to worry about the staff hearing your order wrong!

Come back in a day and I should have the second half of my adventures ready for you!  But now it’s time for this fox to sleep!