Yesterday I told you about the adventures I had in Seoul on Friday up through lunch.  Today I will finish recounting what happened to me that day.

Following lunch, I walked south towards the 한 (Han) river in search of a museum for martyrs.  I had memorized a map the night before, so I didn’t have much trouble at all.  Down one big street and then follow the subway tracks as they ascend out of the earth to make the river crossing.  I didn’t spend much time here because I saw a sign that seemed to say shorts are not allowed (at least that’s what the picture seemed to say, but I couldn’t understand the Korean).  Since I was wearing shorts, I didn’t feel like pressing my luck.  However, I did learn that 절두산 (Jeoldusan, literally “beheading mountain”) was where Korean Catholics were executed in 1866. 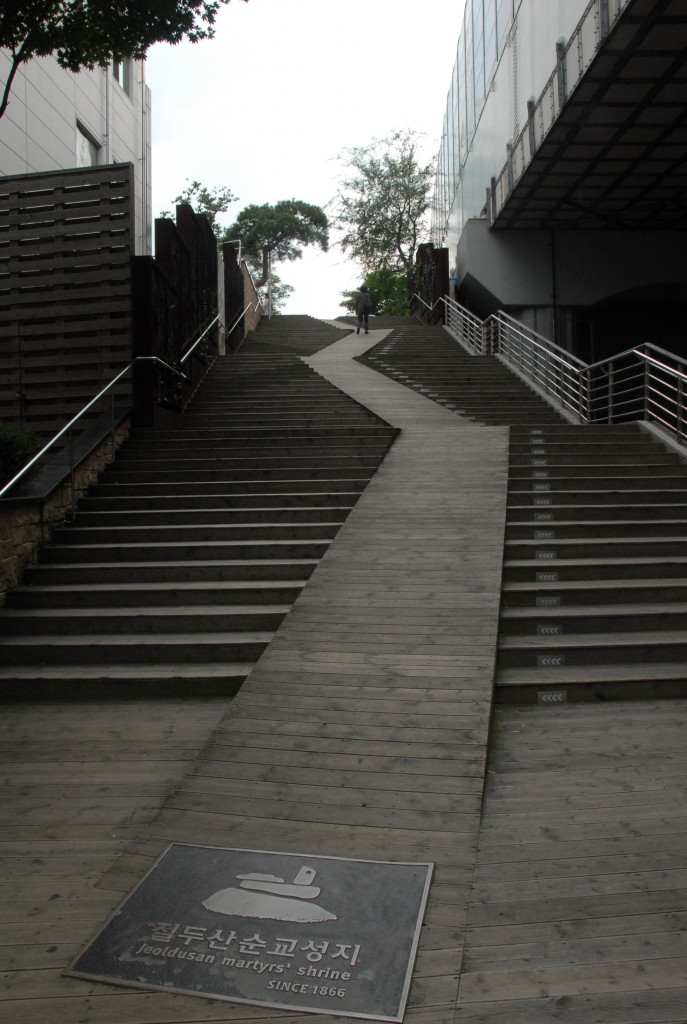 The path leading up the Jeoldusan Martyrs’ Shrine.

After that sombre stop, I hopped on subway line 6 and headed for Seoul’s World Cup Stadium.  This stadium was built for the 2002 World Cup.  But I wasn’t so much interested in the stadium as the several parks surrounding it.  The parks are collectively known as the World Cup Park.  There is 노을(Noeul, “sunset”) Park, 하늘 (Haneul, “sky”) Park, 평화 (Pyeonghwa, “peace”) Park, 난지천 (Nanjicheon, “Nanji stream”) Park, and 난지한강 (Nanjihangang, “Nanji Han River”) Park.  I only managed to wander through Pyeonghwa and Haneul parks.  So I will definitely have to return! 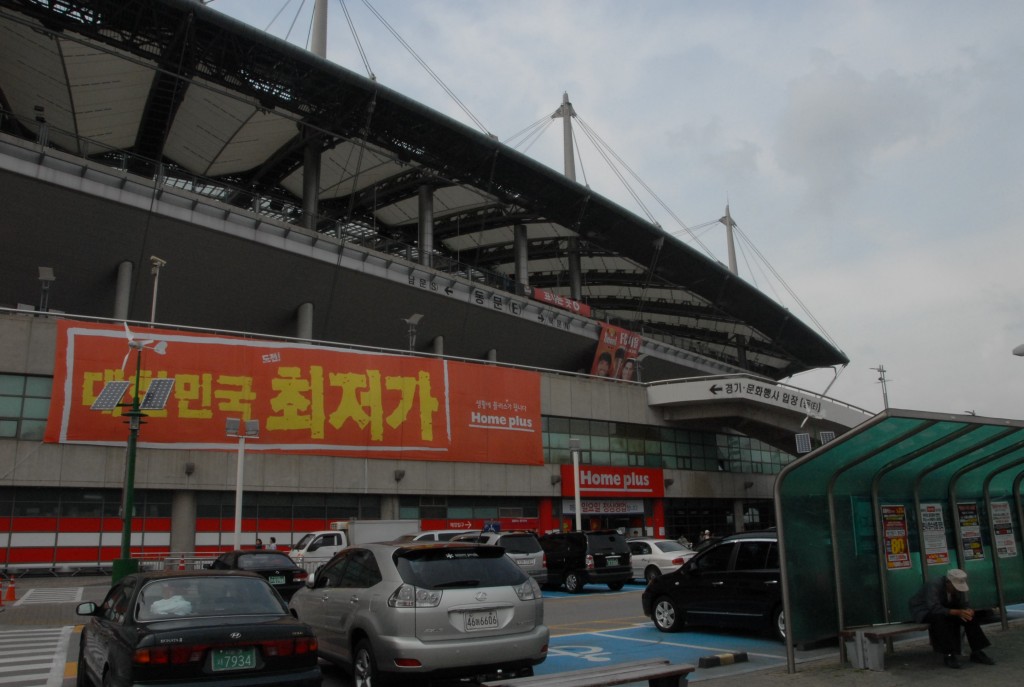 A supermarket that is part of the stadium…

The above picture was the first thing I noticed when I left the subway station.  The Home Plus supermarket was built into the outer part of the World Cup stadium.

I guess it makes sense (taking concessions to a whole new level?), but it is one of the more unexpected things I have come across in my travels in Korea.  Oh, before I forget to mention it, because I know the Korean word for fox (여우), I could tell when people noticed my ears and tail.  It was rather amusing to hear people’s exclamations or laughter.

Granted, I couldn’t understand most of what else they said…

The first park I wandered through was Pyeonghwa and it’s a rather cool park.  It has a pond with fountains in it, a plaza with fountains, a play structure area, and paths that meander through trees.  It was rather relaxing to romp through this park.  Though, there was some sort of event going on in part of the park and I could hear the music from it.  At one point I was passing by a group of teens (I think) when the song “Gangnam Style” played.  All at once they all started talking excitedly and I definitely heard them mention the song’s name more than once.

After wandering through Pyeonghwa park, I began my climb up the 275+ stairs to Haneul park.  The interesting thing about Haneul park is that it is built on top of an old landfill, which reached a height of 98m above the surrounding land.  It’s part of a project to return the area to a more environmentally friendly status.  The gases being siphoned out of the landfill are being used to heat the World Cup stadium and a nearby apartment complex.  There are also wind turbines on top of the hill that power the park’s lights.  Because of the height of Haneul park, I was able to get some good shots of the city.  I also took some video, which I might have up in a day or so.

On my way into the heart of the park, I passed a group of elementary students.  As they began to notice my ears and tail, they started saying things in Korean to me.  I didn’t know what they were saying, so I smiled and kept walking.

Then they ran ahead of me, stopped, watched me pass by, then ran ahead once more.  And then one of them tried to touch my tail…

Naturally, I dodged.  But my quick reflex save resulted in drawing their aggro (translation: managing to evade the kid’s attempt to touch my tail resulted in focusing all their attention on me).

I think I heard one of them say, “Who are you?” before a number of them charged me.  Dear reader, I ran!

I bounded up that path, giggling in delight, as a horde of Korean children chased after me!

When it sounded like they had given up, I slowed down to an easier pace (it is still warm and humid here in Korea).  But I soon heard the thundering of small feet behind me.  I waited until it sounded like they were nearly to me before taking off again.  Ahead the trail curved and split in two.  I took one path and then darted into an area shielded from the trail by bushes and tall grasses.  There were several raised platforms covered by roofs (a Korean equivalent of picnic shelters, except you often take your shoes off first) and all were occupied.  The people were quite amused by me.

My respite did not last long, for I heard the children approaching from one of the entrances into this picnic area.  I tried slipping out the other entrance.  But they spotted me.  I bolted for the closest side path.  I found one that lead into a field of tall grass.  Not only did the tall grass make it easier for me to disappear, but there were several paths that split and crossed in that field.

I soon lost sight of those children.  I was, however, half expecting to hear the braying of dogs and to behold English gentlemen dressed in red jackets come riding into view.

The children did eventually catch up to me.  I had stopped to take pictures and had stood up on a rock to shoot over the top of the grass…

Oh well, it was all in good fun and I hope they enjoyed it as much as I did.

After that I wandered around the park.  There were some good view points looking south over the Han River.  I would have gone up a cool observation platform (upside-down half-dome), but there was some sort of event going on and both ways into the half-dome were blocked.  (Yes, yes, I know that when someone tries to block, show them that you rock, but I’m just too shy and don’t have The Stare…

[are you happy now, Kail?

]).  There was also a series of steps filled with small balls of red clay.  At first I was confused by it, until I saw some Koreans walk down the steps barefoot.  Then I realized that it must be something for massaging or strengthening the feet.  So I walked up it barepawed.  In places my paws sank down until the clay balls were up to my ankles.  It was also slightly painful, but in a good way and my paws were starting to toughen up again because of keomdo, so it didn’t bother me as much as it did some of the Koreans, who were groaning as I passed them.  A couple of the Koreans even stopped me and asked to take a picture with me!

I left the park soon after.  Line 6 was pretty full and Line 2 was stuffed full, so I had to stand. But I managed to get a seat on the Sinbundang line.  What was interesting about the subway train I rode on the Sinbundang line was that the entire train was one big advert for a new album by G-Dragon.  The floors, walls, and doors were all covered in a rather elaborate advert.

So that was the second half of my adventures on Friday!

Below are pictures I took in the parks.  You just have to press on one of them and it should allow you to scroll through them. 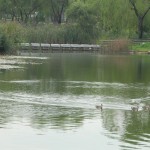 Part of the pond in Pyeonghwa park. 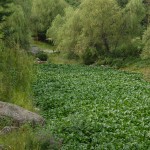 A stream in Pyeonghwa park. 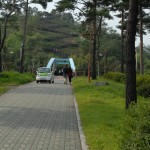 And he’s buying a stairway to landfill…

Do people in nearby apartments use binoculars to watch matches? 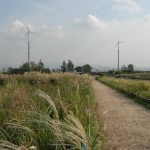 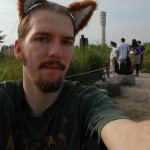 Direlda resting after walking through the red clay balls.