Last night I watched Dead Poet’s Society, which is a fascinating movie about an English teacher at an all boy’s school and a group of students who are inspired by him. It isn’t a movie for young kids, but it would be a good choice for discussion with teenagers. Themes include: conformity, pressures on students (academic and parental), thinking for oneself, creativity, and poetry. It is not a happy movie, though the ending does shine a dim ray of hope for some of the students. There are moments of beauty and moments where teenage boys push against the great expectations of parents and headmasters in ways that aren’t always healthy.

But I’m not here to convince you to watch or not watch this movie. Rather, I want to delve into some of the themes brought up by this movie because of how they connect to my own experiences. So let this be a spoiler warning: what comes after the break will reveal aspects of the plot and ending; caveat lector. END_OF_DOCUMENT_TOKEN_TO_BE_REPLACED

Winter holiday is ending.  School starts on January 12th (so tomorrow).  It’s a new semester and I have new responsibilities!  You see, since three of the four students in my ESL class tested into regular class and the school has more than one ESL teacher, it was decided that I would move to more of a librarian.  In addition to my librarian duties, I will also be the Warden of the Infirmary, the Online class Proctor, as well as teach a creative writing class! ^^

I was going to say something about my adventures yesterday evening at the GOMTV studio, but I think I will hold off on that for this weekend.  I need to be getting to bed…

Also, I’m going to be doing a little bit about SOPA and PIPA that are floating around in the US Congress this weekend because researching them is the primary cause I haven’t been writing about my adventures.  So expect more from me this weekend!

I survived the first week of school! It was a bit touch and go at the start, but thanks be to God for helping me through it. I have four 6th grade ESL students (though one is on a family trip and won’t be in class until the 6th or so…

) and nine seniors for a senior seminar that is attempting to get them ready for American universities.  [Before I posted this, another week of school had passed – the school open house and lesson planning took a lot more time than I thought they would.]

The ESL kids are fun – though when I give them a quiz or homework they don’t like, at least one of them says, “Teacher, no.” And I had to make all of the extra thumbtacks disappear because one of the two boys was poking the bulletin board repeatedly with them. That student also likes to lean back in his chair, though after he fell over backwards while doing so, he’s more open to my reminders to keep the chair on the floor! Devotions in the morning are hard – even with my adapting the text for their level, they still look like deer in the headlights. They’re good at math – the first four chapters of their math book breezed by this week (in part because they knew it and also because they didn’t have their matchbooks yet) – their only trouble is the English math vocabulary. I’ve been having them writing every day and on Friday we had a debate on “Are girls better than boys?” – this topic got them talking a lot in English, which was a blessing.

The seniors have been working on resumes – their final draft is due on Tuesday. And once that is done, we’ll do a reflective essay and hopefully I’ll have more to ramble about for them. It is and isn’t a blessing to not have a textbook.
END_OF_DOCUMENT_TOKEN_TO_BE_REPLACED 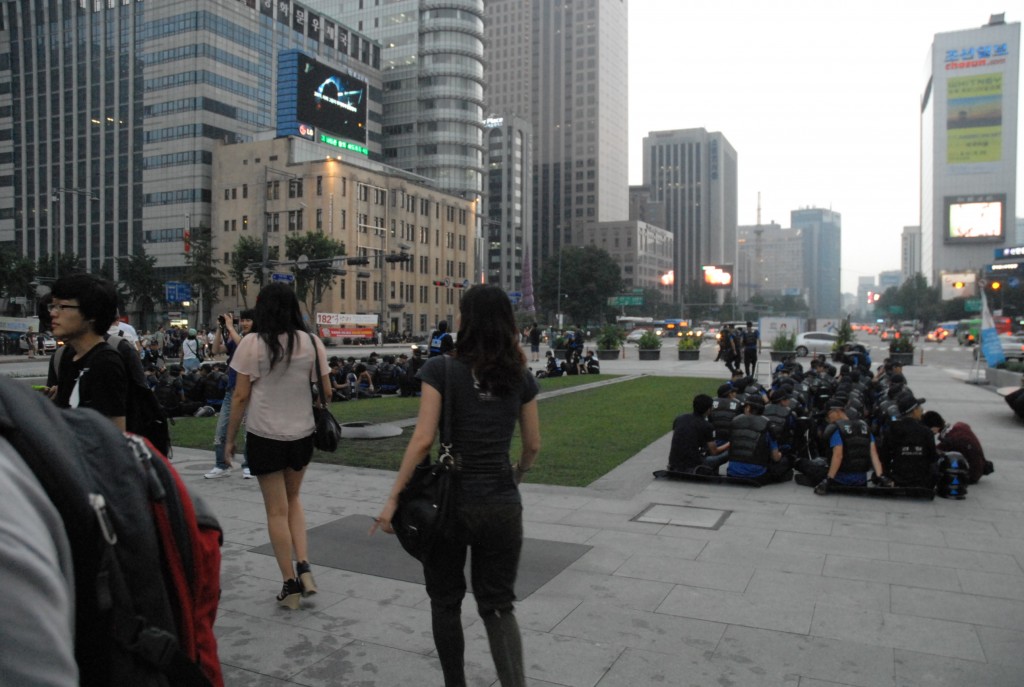 One of my fellow teachers tried to get some officers to explain what was going on, but they didn’t really speak English and eventually one of them made an “x” with his arms and said, “Secret.”  We happened to be in view of a platoon of officers and all of them turned their heads and looked right at us.  Then one of them came over and asked us if we needed any help.  We explained that, no, we didn’t need help, but we were curious as to what was going on.  The officer tried to explain, but repeatedly said, “It’s hard to explain” and mentioned something about it being cultural.  My fellow teacher guesses it is probably some sort of training or drill. END_OF_DOCUMENT_TOKEN_TO_BE_REPLACED